Melissa’s mother always encouraged her to be uncompromising and expansive in her vision.  Initially Melissa had her sights set on taking to the skies, but was unsure how to pursue this dream. Following an inspiring chat with her mother she decided to become a pilot. These days, whilst not averse to flying, Melissa prefers to keep her feet firmly on the ground (favouring the countryside!) Melissa tells us: “It was from this encouragement to think big that Genevieve was created. If I live to enjoy it, why not make it?”

The search for the perfect terroir and quality grapes led Melissa to Bot River and there she discovered a beautiful pocket of Chardonnay, located in the Van der Stel Pass. Determined from the outset to make a sparkling wine of unsurpassed quality, and to continue to do so each year, Melissa’s original vision soon became a well-received reality.

The first vintage was only 5500 bottles of Genevieve MCC,  produced in 2008 and released in December 2009.  In 2009 another 5000 bottles were enthusiastically received by the local wine industry.   In 2012 the Genevieve MCC 2010 was released. With 10 000 bottles produced and extensive time on the lees, Genevieve MCC ensures elegant characteristics and style as well as increased availability.

Why the name Genevieve MCC?
Melissa’s parents spent much of their time in France indulging their extraordinary love for the radiance and energy of Paris. France’s exuberant ‘city of light’ inspired Melissa’s parents to give her the middle name ‘Genevieve’ for the patron saint of Paris.  Mother and Father both intended that Melissa would come to epitomise the same exuberance and uncompromising optimism they experienced in France.  Genevieve MCC draws from this family history and expands upon it, combining a serious, yet playful bubbly character in this exciting methode cap classique. 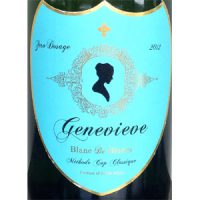